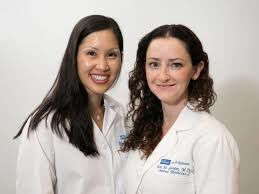 Iowa – You’re describing what is known as a common wart. It’s a small, raised skin growth caused by one of the estimated 150 different varieties of the human papilloma virus, or HPV. Other types of HPV cause different kinds of warts. These include plantar warts, which are callous-like growths on the soles of the feet; genital warts; and smooth, flat-topped growths known as flat warts, often seen on the face and forehead.

Common warts don’t present any health dangers. However, they can be unsightly and cause embarrassment. They’re typically about the size of a pencil eraser or smaller, may be circular or oval, and can appear anywhere on the body. Common warts may grow a smooth, domed top, or they can have a wrinkled appearance, like a head of cauliflower. They’re often a different color than the surrounding skin, including brown, gray, pink or beige. Some may contain what look like small black dots, which are actually tiny blood vessels filled with clotted blood.

If you get a common wart, you’ve come into physical contact with the virus that causes it, either on someone’s skin, or on a surface an infected person has touched. The virus can enter the body through a break in the skin, and if your immune system can’t fight it off, a wart will soon appear. Common warts are painless, but when they crack, or if you pick at them, they can bleed.

In most cases, your body’s immune system will rally, and the wart will eventually vanish, usually within a year or two. Those who would rather not wait have several treatment options. Most people can try over-the-counter wart medications available at the drug store. These are made up of salicylic acid, which is delivered either as a gel, liquid or in a patch. The acid gradually removes the layers of skin until the wart is gone. It’s helpful to soak the wart in warm water prior to applying the salicylic acid, as it will allow the medication to penetrate deeper into the many layers of tissue. In between treatments, use an emery board or pumice stone to remove the dead skin. Be sure to isolate these tools since they can transmit the virus. Side effects of this treatment can include skin irritation and discomfort. Never use salicylic acid on the face or on the genitals. People living with neuropathy or diabetes should not try at-home wart removers and should see a doctor instead.

If you try a home-based treatment and it’s unsuccessful, your doctor also has several options available. One is that same salicylic acid, but in a higher concentration, which requires a prescription. Another approach is cryotherapy, which uses liquid nitrogen to freeze the wart. Warts may also be removed with a laser, burned off or cut away.

Any time that a wart changes shape or color, or if it becomes painful or infected, it’s important to seek medical attention.