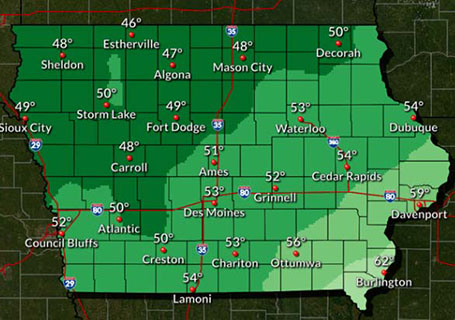 WATERLOO – You’ll need a jacket if you go out anywhere across the state today to protect yourself from the cool temperatures and in some cases rain.

National Weather Service Meteorologist Jim Lee says a massive storm blew across the central United States.
He says the storm blew out the searing heat we had and now the cold front that’s creating the showers has stalled over Iowa and we could see several days of persistent rainfall. Lee says the cold could give many cities across the state a record low high temperature. He cites Des Moines as an example, where the temperature had hit just 53 by around three o’clock.

“The normal high temperature right around 80 degrees. The record coldest high temperature for this date is 58. As we look around at different places in Iowa — Waterloo the record for today is also 58 — Ottumwa it’s 61 — they’re not going to be even close to that. Mason City is 53, and it’s currently 46 at this hour,” according to Lee. “So it looks like a pretty safe to break that record in many areas.”

While it is jacket weather — this is different than the first frost that will come later — and Lee says there’s no worry for plants.
“Not even really close to record lows for the date. We’re multiple degrees above the record lows. So this cold is more remarkable for the fact that it’s just not warming up during the day. It’s only going up a few degrees above the overnight low temperatures,” Lee says.

He says tomorrow will feel much the same. “Maybe just a degree or two warmer — but really no appreciable change there,” Lee says. “But then it should start to warm up about six or eight degrees each day from Thursday through Saturday. By the weekend we are expecting highs probably in the 70’s or so. Still slightly below normal for the time of year — but pretty nice.”

Lee says the rain chances will linger through much of the next three or four days — which should help with the areas that had just expanded into drought status.  The records become official at midnight.