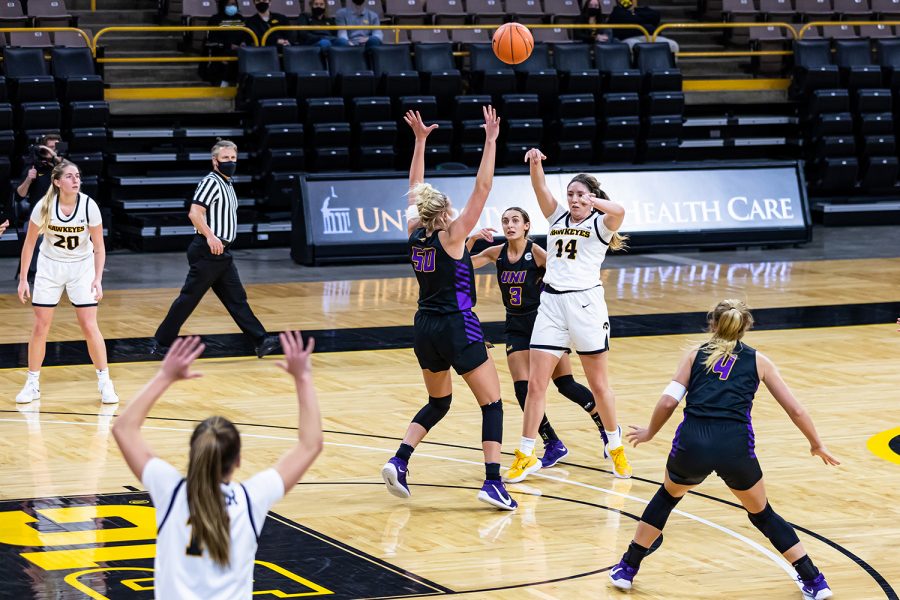 Iowa suffered a hard loss early on in its last season to Northern Iowa in Cedar Falls. The score looked much different in last week’s matchup, as Iowa waltzed to a 96-81 victory in Iowa City.

Caitlin Clark was incredible in her college debut, scoring 27 points and notching four assists in the win. But McKenna Warnock also had a huge impact.

The sophomore out of Wisconsin shot four-for-seven including one-for-two from three-point range. She led the team with 13 rebounds and six assists, while also grabbing a steal. If she can continue this level of production, she will become one of the most important players on the team.

“She has a lot of good in her game right now,” head coach Lisa Bluder said. “She brings us a lot because she can rebound, she’s versatile, she can shoot threes, she can drive, she can post up and she’s a good passer.”

Warnock became an important player coming off the bench last season, and flashed her brilliance in several games, including a 22-point and 10-rebound game against Michigan State. She started three times, but played in every game as she averaged just under eight points per game and 4.5 rebounds per game.

Warnock shot over 50 percent from the floor and 44 percent on three-point attempts, so she can be efficient as well.

Her great late season form earned a spot in the starting lineup against Ohio State in the Big Ten Tournament.

She is a great all-around player and is going to be really important to the program in the future, Bluder said.

Over the off-season, Warnock worked hard in the gym and has found herself on the court.

“I’ve created my own identity more this year,” she said. “I got a lot stronger off the court so that’s helped me on the court rebound and do those little things that were expected of me this year.”

Now with a year under her belt, she is looking to help her teammates out as she has already become one of the more experienced players on the team. The nervousness that is normal in one’s freshman year is now gone, and she feels more ready than ever to compete.

“Bringing a calm presence is something I’m really looking to do this year,” she said.

Warnock and the rest of the Hawkeyes will turn their attention this week to Drake and Wisconsin. The two will be a step up in competition from Northern Iowa, but Iowa looks poised to handle the step up.

The game against Wisconsin will be especially meaningful to Warnock, who grew up in the Madison suburb of Marshall, Wisconsin.

The team takes on Drake in Des Moines on Wednesday, before coming back to host the Badgers Saturday.