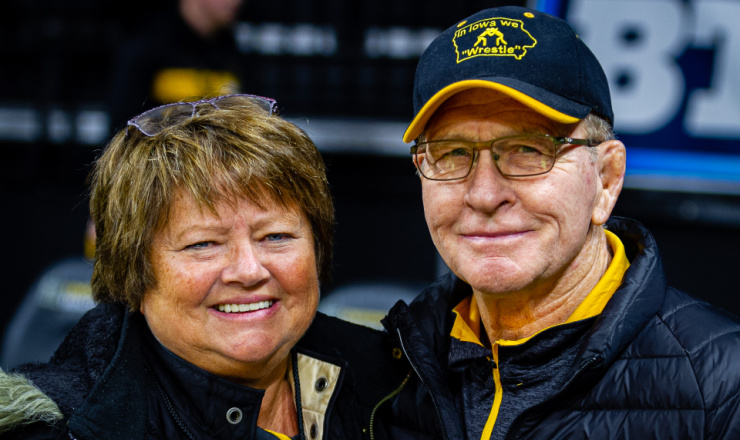 Established by President John F. Kennedy in 1963, the Presidential Medal of Freedom is the nation’s highest honor for a civilian. It is awarded by the President of the United States to individuals who have made exceptional contributions to the security or national interests of America, to world peace, or to cultural or other significant public or private endeavors.

“To get an award like this, it’s a lifetime achievement award, not only for what you did, but for what you continue to do,” said Gable.

Gable was a three-time Iowa state high school champion for Waterloo West and a two-time NCAA champion and three-time finalist for Iowa State. He had a combined record of 181-1 in his prep and college career, losing only in the 1970 NCAA finals. Gable won the Pan American Games and the world championships in 1971 and the Tblisi Tournament and the Olympics in 1972. He did not surrender a single point in his six matches at the Olympics and was named the Outstanding Wrestler at the Tblisi Tournament, considered by many to be the toughest tournament in the world.

After stepping off the mat, Gable became the most successful coach in NCAA history, coaching the University of Iowa from 1978 to 1997. He led the Hawkeyes to 21-straight Big Ten titles and 15 NCAA team championships, including a record nine in a row from 1978 to 1986. Gable coached 152 All-Americans, 46 national champions and 12 Olympians, who combined to win eight medals (four gold, one silver and three bronze).

Other athletes who have received the Presidential Medal of Freedom include Tiger Woods, Jesse Owens, Billie Jean King, Michael Jordan, and Babe Ruth.

National Wrestling Hall of Fame & Museum
America’s shrine to the sport of wrestling, the National Wrestling Hall of Fame & Museum was founded as a nonprofit organization in 1976 to honor the sport of wrestling, preserve its history, recognize extraordinary individual achievements, and inspire future generations. The National Wrestling Hall of Fame has museums in Stillwater, Oklahoma, and Waterloo, Iowa. The Stillwater, Oklahoma, location reopened in June 2016 following a $3.8 million renovation while the Waterloo, Iowa, location reopened in March 2019 after undergoing a $1.4 million renovation. Both museums now feature interactive exhibits and electronic kiosks, as well as the opportunity to watch NCAA Championship matches from the 1930s to present day. Stillwater also has the John T. Vaughan Hall of Honors where the greatest names in wrestling are recognized, including iconic granite plaques presented to Distinguished Members since the Hall of Fame opened in 1976. The museum has the largest collection of wrestling artifacts and memorabilia in the world, including the most collegiate and Olympic wrestling uniforms. Wrestling truly is for everyone and the diversity and accessibility of the sport continues to be highlighted through exhibits featuring females, African-Americans, Asian Americans, Native Americans, and Latino Americans. There is also a library featuring historical documents, including NCAA guides and results, as well as books on the sport.