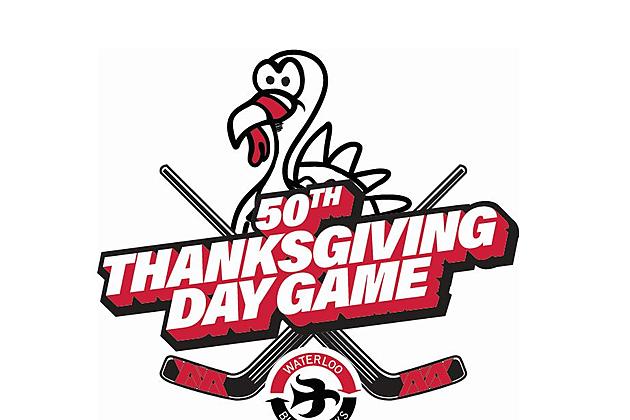 The countdown to the beginning of the Black Hawks hockey season is less than two weeks away, as Waterloo prepares to open their season on November 6th & 7th at home, in PartyTown, versus the Omaha Lancers both nights.

You can feel the excitement building on these unusually chilly fall days, it certainly feels like hockey season. After opening weekend, Black Hawks fans will be ready for the tradition Thanksgiving evening hockey game. Since 1964, only a few Novembers have passed without a Thanksgiving hockey game in Waterloo; as the Black Hawks prepare for the city’s 50th Thanksgiving home game in 2020, a new book looks back on the special tradition which holds a unique place in junior hockey.

“50 Thanksgivings”; Waterloo’s Hockey Holiday, reviews the 50 games played on the final Thursday in November. The book, written by long-time play-by-play radio announcer Tim Harwood, provides details about each game, box scores, an index of all Waterloo Thanksgiving goal scorers, along with a look back on many other Thanksgiving moments in the Cedar Valley, and dozens of photos.

“The photos are great, there is a ton of information, and I think Black Hawks fans will really enjoy this book as they celebrate this milestone with us next month.”

Copies of the book can be ordered through waterlooblackhawks.com either for pickup at Young Arena or delivery by mail. It is also available from online and at traditional booksellers.