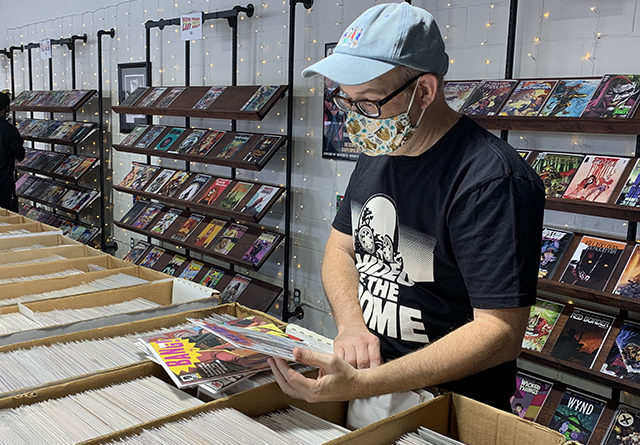 Tucker business owner Chris Brennaman met a friend for a drink in March. He was surprised when the friend remarked, “I guess this is the last time we’ll get to do this for a while.”

“I didn’t know what he was talking about. I had heard about the COVID-19 pandemic, but I thought that was happening mostly in other places. I had no idea it would affect me or my business,” he recalled. Soon after, however, Brennaman, one of the owners of Infinite Realities, a comic book and game store in Tucker, had to close his business because of COVID-19.

“Normally people, many of them regulars, come at least once a week to see what’s new. The place can get fairly crowded. I realized we could put in social distancing protocols almost immediately, but we wanted to do it right. We didn’t want to risk anyone’s health,” said Brennaman, who owns the store with two partners, all of them self-described as “comic nerds.”

After Infinite Realities closed in March for in-store shopping, customers could still come by for curbside pickup. “In a way, the pandemic spurred an interest in the kinds of things we sell. People were staying home more, so reading or playing board games became more popular,” he noted.

In addition to not wanting the usual cadre of customers browsing the store in too close proximity to one another, Brennaman and his partners had another problem: New stock was not coming in. “We normally have new comics and games coming in every Wednesday and regulars come to check them out,” he explained, “but during the pandemic a lot of comic book publishers and game manufactures shut down. These weren’t essential businesses, so they had to close down. With a break in the supply chain, the shelves were bare within a month.”

The shop opened initially in late 2018, selling new and used comic books along with other recreational items. “Things had been going well. With a store like ours that caters to a specialized clientele, you have to wait until the word gets out to comic book fans. The word spread pretty quickly about us. Our first-year projections looked good,” Brennaman recalled.

He said he knew when he and his partners first considered a comic book store it was a risky venture. “When we met over dinner to discuss it, we knew one was there to talk us out of ‘this crazy idea.’” By the end of the evening, all the partners agree to open Infinite Realities.

He said he and his partners were aware that few new businesses are profitable in the first year “so we were prepared for the possibility that we would have to operate for a year, even a few years, before we started to make money. Some businesses take as long as five years to become profitable, but this pandemic is something none of us expected. It has basically thrown all small business owners for a loop no matter what business they’re in. I have friends who have closed their businesses permanently through no fault of their own. They did everything right from a business perspective, but this pandemic was too much for them. Frankly, a lot of it has been a matter of luck,” Brennaman said.

He said the business is slowly starting to pick up as the store’s suppliers are again offering new merchandise. In mid-June the store reopened in a limited way. Hours have been cut, customers and staff are required to wear masks and the number of customers who can be in the store at one time is limited.

Brennaman said he misses the comic book conventions and other gatherings of those who share the hobby but realizes those are on hold for a while. The store has increased its online presence with such programs as Q &A sessions for comic lovers. “This is more to keep us in people’s minds while the store is not in full operation. We don’t want people to forget us.”

Brenaman isn’t certain when Infinite Realities will be in full operation again, “I don’t know. I’m not a public health expert. I’m an expert in when Superman comics debuted. I’ll leave it to the public health experts to say when we can safely return to normal,” he said.