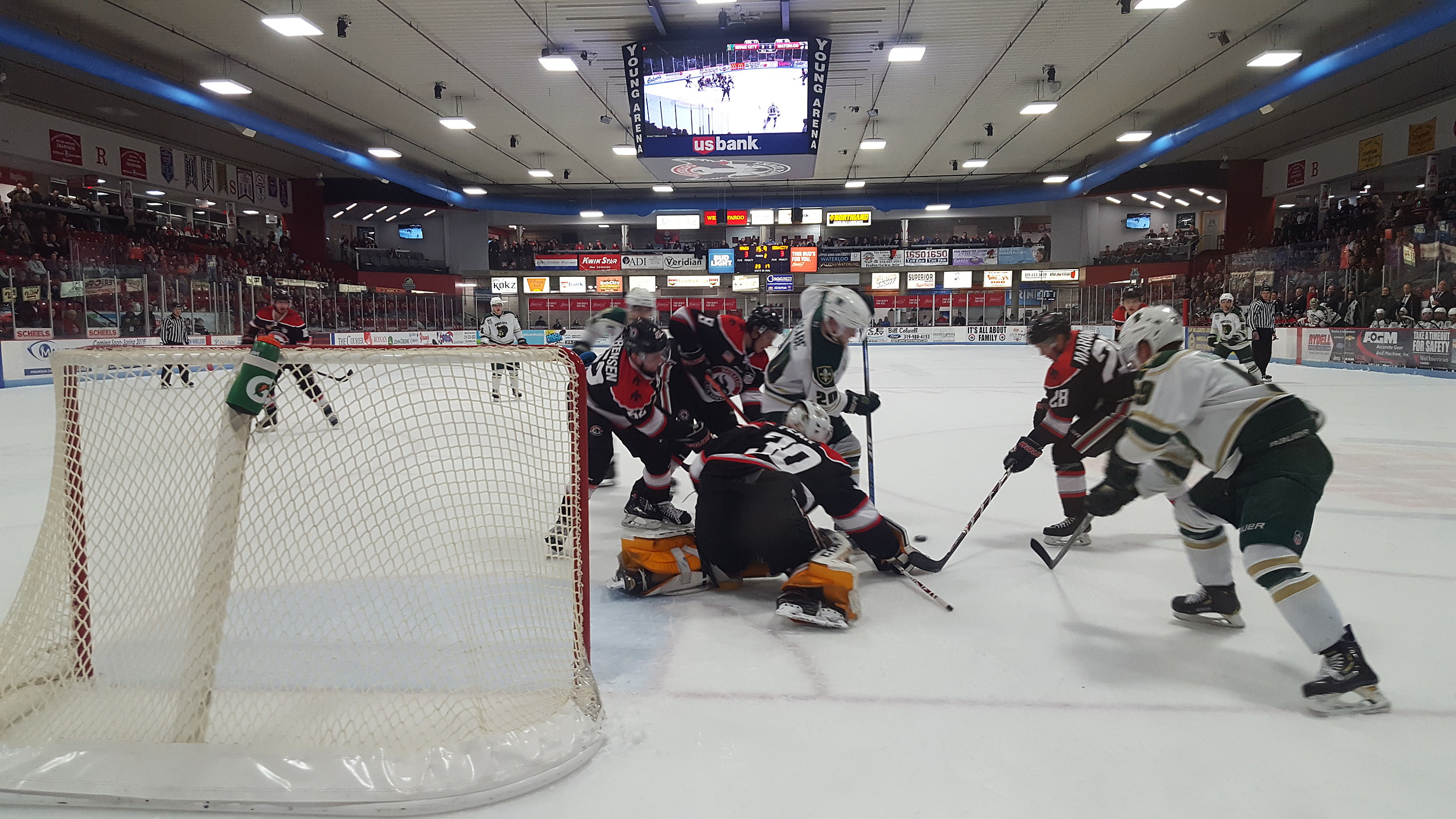 The Waterloo Black Hawks finally got their season started this past weekend playing two games versus Sioux City at the Tyson Event Center. Then they had an early trip home on Sunday because their Sunday afternoon game versus Tri-City was postponed.

FRIDAY NIGHT AT SIOUX CITY
Sioux City had been one of Waterloo’s final stops before the last month of the 2019/20 schedule was canceled due to the pandemic. The Hawks won the two games versus the Musketeers during that March weekend. Now, flash ahead, 8 months later, and the 2020/21 season kicked-off with a 4-2 victory on Friday night against the Musketeers. The game was tied at 1-1 after the first period, then two goals during a 51-second span in the 2nd put Waterloo ahead permanently. Casey Severo won a faceoff, which turned into a quick shot to the top corner for Michael LaStarza. In the ensuing shift, the puck came to Jacob Jeannette near the top of the crease, and with his back to the goal, he slipped in a low backhander.

It was a 3-2 game going into the 3rd period, as the Black Hawks began the 3rd period shorthanded but successfully killed the Sioux City power play – then two others during the final ten minutes – to maintain their lead. Wyatt Schingoethe sealed the win with an empty-net score as 1:12 remained. Black Hawks goalie Jack Williams finished the victory with 29 saves.

SATURDAY NIGHT AT SIOUX CITY
In Saturday night’s rematch, Sioux City did all of their scoring in the final nine minutes of the game, edging the Black Hawks 4-3. Waterloo was up 3-0 going into the 3rd period, when they saw their lead evaporate. The Musketeers’ Brian Carrabes produced the game-winning shot at 18:02, getting behind the Waterloo defense and cutting across the face of the goal to push the puck past goalie Jack Williams as the two came together. Sioux City outshot the Hawks 14-4 in the third period after the two teams had a nearly even number of chances in the first 40 minutes.

Waterloo’s scoring came from Luke Bast as he came out of the penalty box near the 7:45 mark to find the puck waiting for him, for a 1st period goal. The Black Hawks added two 2nd period goals, the first from Max Sasson on a partial breakaway at 9:47. Then at 18:15, Zane Demsey jumped into a rush, receiving a feed from Sasson to score on a low shot from the high slot.

SUNDAY AT TRI-CITY STORM
Unfortunately, this is something we’re going to see a lot of this season. Sunday’s game between the Black Hawks and Tri-City was declared a “No Contest”. Per league safety protocols, minimum safety standards were not met to play the game. The USHL is working with Waterloo and Tri-City to reschedule the game.

NEXT UP?
The Black Hawks are back on the road this Friday night at Lincoln (Ice Box) and at Des Moines (Wells Fargo Arena) on Saturday night.